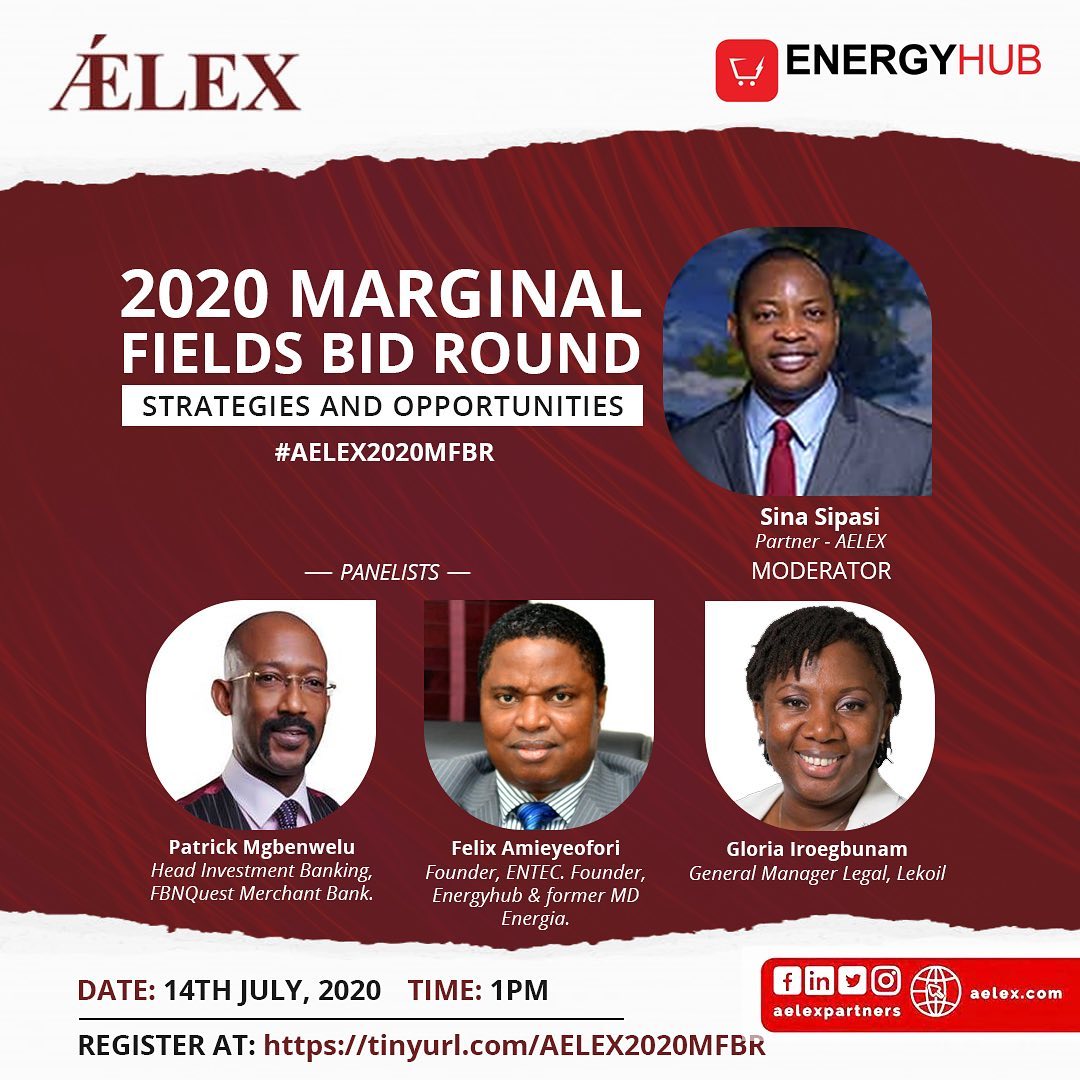 Experts with deep knowledge of the operations of marginal fields in Nigeria have been speaking on success strategies for bidders and potential winners of the recent bid round for 57 marginal oil fields. The fields on offer are on land, swamp and shallow offshore terrains of the Niger Delta.

Chief among the recommended strategies is strong partnership paradigms, through which resources and skillsets are pooled to conduct excellent due diligence on the fields won deliver bankable technical and commercial bid documents. And if the bid is successful, sound partnerships arrangements become the bedrock on which the successful journey to first oil is built.

They also advised bidders who eventually win, to make sure that they start off with very competent legal, financial and technical advisers, because having sound professional advice in these three areas, will cut by half their costs and other resources expended to get to first oil.

At the July 14 webinar co-hosted by AELEX, one of Nigeria’s leading commercial law firms, and EnergyHub – Nigeria’s premier energy marketplace, speakers harped on learning from the experiences of winners of the 2003 marginal fields bid round, especially in addressing inter-party or partnership issues comprehensively, with clear agreements on all operational issues before takeoff.

The event was moderated by Sina Sipasi of AELEX, while the panelists were Dr. Felix Amieyeofori, a petroleum engineer and Chairman, Entek Integrated Resources Limited, owners of EnergyHub; Gloria Iroegbunam, General Manager Legal Services at Lekoil, an Africa focused E&P operator with interests in Nigeria and Namibia; and Patrick Mgbenwelu, a financial expert and Head of Investment Banking at FBN Quest Merchant Bank.

An Overview of the Marginal Fields Regime in Nigeria

According to him, 16 of the 30 winners from the 2003 bid rounds are now producing commercial oil, a good success ratio he says, adding that although they are delivering only three percent of the nation’s overall production, the experience and exposure from the marginal fields operations have given Nigeria a huge reservoir of knowledge and experts on E&P operations. He said that many of the pitfalls have been identified and lessons learned from both the marginal fields operations and the operations of independents like Seplat, which emerged from the 2010 divestments by the IOCs.

In her intervention, Gloria Iroegbunam harped on important issues to consider in selecting partners that can build synergy and the critical mass required to succeed. First, she advises operators to think long term in choosing partners. They should also decide upfront who bears the transaction costs, especially if the bid is unsuccessful; agree the termination clauses in advance; and as much as possible, choose partners with similar regulatory and governance obligations, so that one party does not want to do something required of it and the other refuses to go along.

Financial Capabilities of the Bid Consortium

On the financial capabilities of the bid consortium, Patrick Mgbenwelu pointed out that this is usually the big issue, because most bidders have the technical capability to produce the fields, but need to present a financing model that will convince the Department of Petroleum Resources that they can finance the project.
Patrick emphasised that banks consider the strength of the balance sheet of the consortium as key, while also considering the relationships of the individual companies in the partnership with their banks because they want to have a “clear line of sight” for the financing of the project.

He said that in modelling financing options, the banks prefer reserve-based lending, which ties the borrowing to the volume of oil and gas in place and the projected production volumes and market prices. “The banks want to be comfortable that the reserves are sufficient to amortise the facility” he explained.
Patrick added that lenders want to be sure that crude evacuation arrangements, pipeline ownership issues, environmental issues and community relations issues are properly addressed before lending to an operator.

On what happens after bidders have been pre-qualified and invited to conduct due diligence, Felix warns that attention should be paid to such details as the field geology, to ensure that technology to produce any reserves present is available. The age of the discovery is also key. Also important is to know how many wells were drilled by the previous operator and data from the wells including those that were producing before the field was abandoned; and closeness of the field to the evacuation and treatment points.

Gloria advised that such due diligence should focus on identifying previous encumbrances and if the reserve is straddling an adjoining lease, which may mean negotiations with another leaseholder. There should also be a clear understanding of the tenure of the lease; if there are any acquisition challenges, right of way, and local community issues.

And for those who eventually win the bids and become operators of the fields, Gloria admonishes them to look at creative ways of using the reserves to raise funds without encumbering the assets, since the guidelines for the 2020 bid rounds prohibit such encumbrances. She pointed out that the waiting time between when the bid is won and when the President signs the award document (which makes it legal), may drag. In such situations, operators have to come up with contingency arrangements.

Felix advises on ensuring that all well data are transferred to the new owners of the field, including engineering, drilling and well completion information. He also opined that it is very important to review previous agreements the previous operators had with the communities such as MOUs and contract exclusivity. “You have to know what they agreed with the community previously. A marginal field operator cannot inherit commitments made by IOCs. You will be dead on arrival” Felix concluded.

After Winning the Bid

Patrick warned that when bid winners are announced, the new operators may be inundated with offers to buy stakes in the asset. In his opinion, such operators should not just accept any money thrown at them. They should carefully study the conditions before accepting equity or other funding. In addition, they should not just get funding for the acquisition of the field, which was the mistake operators of the failed projects from 2003 made.

They should get total package funding to include appraisal and field development. The new operators also need to seek out “patient capital” by going to lenders who understand the oil business and willing to lend long term, with the understanding that the borrower may come back for more funds.

In addressing the inter-party issues which have been a perennial problem for Nigerian partnerships, Gloria argues that individual companies should map their partners very well before going into the consortium. They should also resolve upfront, such details as the voting rights of each partner, and if one partner lifts and markets the crude oil on behalf of the others. There should be a clear designation of the operator and non-operating partners as well as clear governance and decision making templates.

In rounding off, Felix argued that the most important objective of the new operators will be to get to first oil as quickly as possible and at minimum cost. “You have to be careful how you engage technology, so that those companies with proprietary technology do not stay on the field longer than they should, which will impact your costs” he warned, adding that the technical partner has to be truly technical. In his view, the technical partner has to know how to get out the oil cheaply and get it to where you want. He has to understand the Niger Delta geology, otherwise, the operator will apply the wrong metrics and run into problems.

“Nigerians,” he says, “are not good joint venture partners. They fight one or two years before they start operating”. The antidote to these contumacious beginnings, according to him, is to have robust corporate governance structures that can address how to invest and how to share, including contracts sharing between operating and non-operating partners.

In his final comments, Patrick procuring experienced technical, legal, and financial advisers, adding that the most ideal technical partner is the one with a stake. For instance, a technical partner that is an off-taker is a marriage made in heaven, because he stays the course as a result of his interest in a successful result.

Soji Awogbade, Head of the Energy Desk at AELEX in bringing the webinar to a close, asked potential bid winners to address the timelines between production and marketing; understand all the ramifications and implications of the possible force majeure; be innovative, for instance by looking at secondary uses of products on-site instead of expensive evacuation processes; and a detailed and careful appraisal of the infrastructure challenges faced by the field owners.

Stay up to date with emerging trends in the Energy Industry.

No Comments on Guide to Nigeria’s 2020 Marginal Fields Bid Round/
Share :